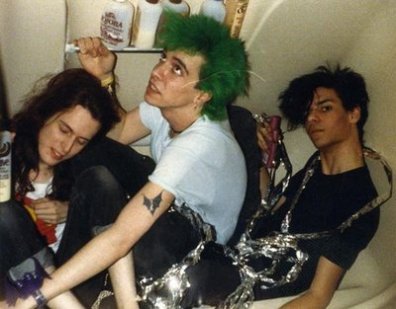 Bobby Bunny had just left BunnyBrains in 1989 to join ex-butthole surfers-fronted neo-psych neo-acidrock band Beme Seed. In his spare time he got together with his schoolchums Rik and Eddie and they started another sloppy noise band (originally named "The Boy With The Green Hair Band", then "Hairband") to play SUNY Purchase and environs. Davisha and Lauren, the hottest punk chicks in school joined as twin vocalists, renamed the band Fish Fish, and the group got gig opening for locals White Zombie (way back when they were actually cool) and later Kramer (of Bongwater fame). Joy Unspeakable, inarguably the most psychedelic girl in school eventually took over on vocals and Fish Fish played a few more shows and radio appearances. Rik and Eddie went on later to form the world famous glampunk band Toilet Boys, and after that Eddie was playing drums with Psychick TV.

back to home page

Bilge Dasto is an all-free net label. All music is FREE for individuals to download and listen to, but NOT FREE for websites to repost or aggregate without permission.
WHEN IN DOUBT, ASK FOR PERMISSION. Illegal reposters will be violated anally with machine tools.